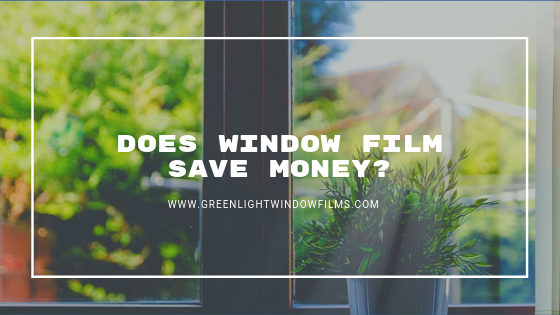 Does Window Film Save Money?

Do you dread the time of month that your energy bill is due? You’re not the only one. Studies show that the average American spends about 2-3% of their income on energy costs. And of those expenses, heating and cooling costs account for half.

A home that lacks energy efficiency isn’t just expensive. It’s also uncomfortable. It’s hard to sleep at night and enjoy time with your family if you’re constantly too hot or cold. Sure, maybe you save a couple bucks by keeping the heat or ac off. But the price you pay is your sanity.

But what if there was a better way to save? One that doesn’t involve suffering through freezing winter nights and sweltering hot summers? Well, guess what. Window film promises exactly that.

Before we dive into the details of how much money window film can save, it may be helpful to know a little bit about how it works. Window film acts like a sort of filter for your windows that helps control the sunlight coming into your home. The sunlight you see coming through your windows is actually made up of a few different types of light frequencies. Not all light carries heat. Window film blocks only the spectrums of light that are heat-causing. That way, visible light gets in, but heat doesn’t.

Can Window Film Actually Save Money on Energy Costs?

Absolutely, yes. But few people are aware of just how effective it really is. Many people are skeptical when they’re first introduced to window film. They think either that it doesn’t work or that it will make their home dark. So instead, they go out and spend a fortune on new windows, which are far more expensive and take longer to pay off. It doesn’t make any sense.

Window film works just as well as double pane windows. And it’s much, much cheaper. Studies show that over the course of a year, homeowners can save anywhere from 5-30% on their energy costs. That means in just 36 months, your savings will be equivalent to the money you invested. And then every year after that, you still continue to save.

Window film is a great investment for any home. If you’re interested in learning more about window film options for your Austin home, please contact our office.