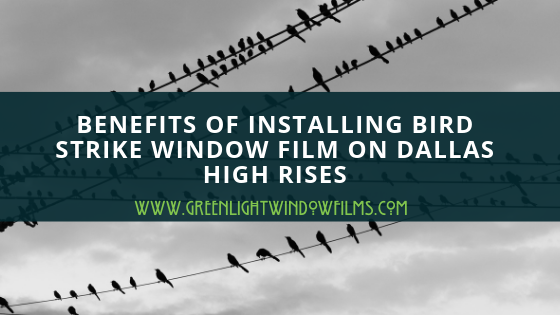 Our world is growing and with that growth comes more beauty with the latest architecture trends of simple clear windows on condos and highrises. Here in Dallas and around the US, new buildings designed with copious clear windows are popping up as our cities grow and expand.  However, these types of structures and their windows, while beautiful, pose a threat to our bird populations. This is because bird strikes on windows of Texas high rises are increasing and the repercussions to birds are devastating. Sadly, our fine feathered friends are incapable of distinguishing these windows from the open sky and resulting in deadly collisions.  Bird strikes are neither good for the birds or humans but birds and some waning species, the fallout is dire. While for building or condo owners in Dallas the damage is expensive–for birds it could lead to extinction. Luckily there is an answer to this issue. A simple and cost-effective solution that could save humans money and save many species of birds from going extinct–window film.  That’s right, “fretted” bird strike prevention film is an incredibly easy way to stop bird strikes on windows. Best of all it is affordable and comes with a host of benefits

For more information on fretted window films for your Dallas high-rise to help prevent bird collisions with windows, contact us at Greenlight Window Films today!