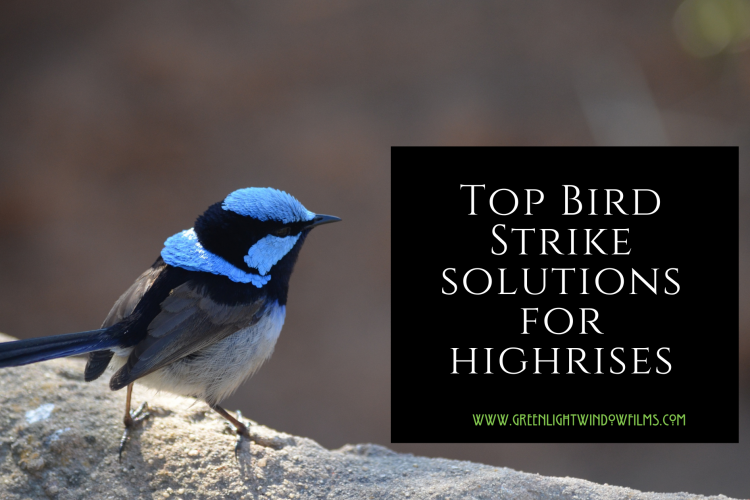 Bird collisions are most common on high rise buildings.  They are a gruesome event that causes grave injuries to birds and expensive repairs for commercial building owners. The good news is– there are ways to avoid these fatal run-ins–they most effective of which are bird deterrent window films

The key to keeping birds from flying into your windows is making them visible to birds. It really is that simple. Since birds cannot tell the reflection of the sky from the sky itself–they try to fly through the glass. Below are a few ways to make your windows apparent to keep avians safe.

Stickers and decals are a solution used by high rise building managers to stop bird collisions.  Decals are somewhat effective because they disrupt the reflection of open sky somewhat.  But they only work when spaced close enough together that birds do not try to fly through them–and with decals this is rarely the case.  In this case, bigger birds will steer clear of your Austin skyrise windows but probably not smaller ones.

Mosquito screens placed over windows break up the reflection of the open sky somewhat but often prove impossible to put on skyrises.  Netting is also an option that keeps birds from actually hitting the windows of highrises (they bounce off the netting instead) but is incredibly expensive, distorts the aesthetics of your building, and still could injure birds.

For the very best bird strike prevention for your Austin commercial building’s windows bird deterrent window film is the only answer.

If keeping birds from flying into your Austin home’s windows and not altering the appearance of your windows is your goal–bird deterrent window film is the solution you are looking for.