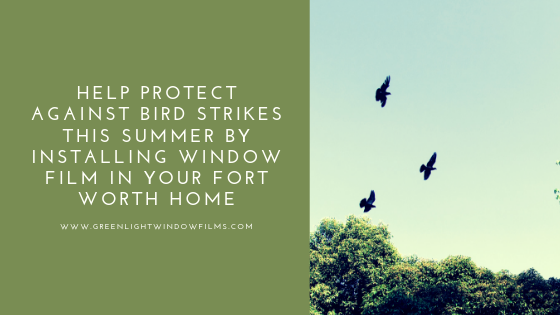 Have you ever sat outside in the park or your backyard and watched the birds? Birds are such delicate, graceful creatures. It’s entertaining to watch them glide through the air, hop along fences, and interact with each other.

That’s why it’s so upsetting to think that us humans are responsible for so many bird deaths. Bird strikes kill millions of birds in the United States every year. They fly into the windows of our homes without even realizing what they’re doing. And we’re entirely to blame.

But it doesn’t have to be this way. By installing bird strike prevention window film, Fort Worth homeowners can take action to prevent bird window collisions.

How Many Birds Die in Collisions Annually?

Bird collisions surprise us when they happen. Dealing with a dead bird in your backyard isn’t just messy; it’s disturbing. That’s why many people are shocked to find how many birds die this way. Each year, somewhere between 365 and 988 million birds die from colliding into windows.

More and more, people are starting realize that bird collisions are a serious problem. Companies have developed ways to make our buildings and homes safer for birds. One of these solutions is bird strike window film. Fort Worth homeowners can install these patterned window films on patio doors, entrances, and windows to make windows more noticeable to birds so they don’t fly into them.

How to Get Started

Installing bird safety window film is a relatively simple and straightforward process. You can purchase the films online, but most people prefer to have a professional do the job just because it’s easier. That way, the film won’t have any bubbles or creases. Simply locate a window film installer in your area and schedule a consultation. They’ll help you pick out a film that looks good on your home and schedule a time to install it.

Installing bird strike window film for your Fort Worth home is a great way to protect local birds. For more information on fritted window film products, please contact our office.