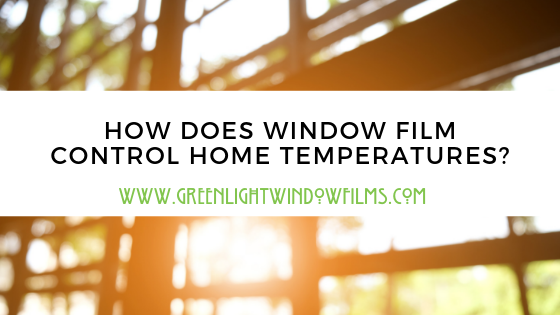 Window Film is quite a powerful technology with several benefits for homes here in San Antonio. One of the primary benefits, which is great for homes here in the San Antonio area is definitely–temperature control. It works for homes in hot and cool climates and everything in between because it is incredibly versatile. So, whether you want to keep the chill out in the deep of winter or, more likely, stop the heat from invading your home in the sweltering San Antonio summers, window film is the way to do it. Beyond temperature control, window film is the best way to keep the harmful UV rays of the sun from damaging your health or your furnishings. It is a 360-degree solution for your San Antonio home and beyond temperature control has a lot of other benefits, like glare reduction that makes it good for the Texas climate. If you have ever avoided certain rooms of your house because they were too hot or too cold– window film is the solution you have been looking for.

Window film is a thin layer of plastic-like material that is applied to the surface of your home’s glass windows and doors. Newer windows come with “built-in window film” but this is generic type protection and will not be as powerful as a “retrofit” for existing glass. So think of window film an upgrade for specialized improvement of solar control, insulation, home comfort. safety, privacy, and other desirable benefits. Window film works by blocking the undesirable sun’s rays. Solar radiation has three forms:

Window film is spectrally selective meaning it filters solar light–blocking the bad and letting in the good–like natural light. This is why it is so useful. For climate control, it is the infrared that causes excessive heat and hot and cold spots and window film blocks these rays. But it also blocks the UV rays coming through your windows too. So it is a sunscreen for your San Antonio home–the equivalent of an SPF 1000.

Window film works through in a variety of ways and materials depending on the film but common types of film include:

Even with all this protection, with the right window film you never have to worry about losing the San Antionio views you love so much. Because window film doesn’t obscure views–it improves them! Meaning your San Antionio home stays more beautiful and more comfortable!

Window Film Eliminates To Much Heat In Summer

If your San Antonio home windows do not have window film they likely let in way too much of the intense Texas sun. That glare you hate does more than just annoy you–it causes excessive heat build-up on your window and into your home. Even with A/C, you cannot get rid of hot and cold spots because the sun’s rays on untreated windows will always radiate through. Sure, curtains and blinds will stop the glare but they cannot stop solar heat gain. Plus, they block out natural light and lovely views. Window Film not only blocks the always frustrating glare but reflects up to 78% of the sun’s heat! When the heat can’t build up on your windows–your San Antonio home stays significantly cooler!

Window Film Keeps The Cold Away In Winter

San Antonio’s weather is fairly temperate but during the middle of winter it gets pretty chilly for those of us used to the Texas heat. This is why window film is also helpful in maintaining home comfort here in the winter too. It traps in the air you pay to heat and redistributes the sun’s rays inside. Many homes here in San Antonio are not very heavily insulated, so any advantage you can gain from window film is key to getting perfect home comfort. No more reaching for a sweater when sitting near a window because hot and cold spots disappear with window film. In fact, window film is such a good insulator, it makes single pane windows perform the same as double and double like triple. This saves on heating and cooling costs year-round!

A staggering 30% of all energy used to heat and cool homes goes out through the windows. Meaning the loss of energy in your San Antonio home, from the windows alone could be costing you thousands. Home HVAC systems simply can’t keep up and run constantly to keep your home at the right temperature. This loss of energy and additional load really takes a toll. It causes your HVAC systems to break. Window film takes that load off your heating and cooling systems. Thereby preserving your unites and saving you money on costly repairs. So window film does more than just save you on energy bills–it also saves you in HVAC systems repairs and replacement. You can also use window film to utilize “green” tax credits in certain states and cities.

Here at Greenlight, we are one of the area’s best window film contractors. Several things make use the best including our impeccable customer service and breadth of experience installing window films. However, what is critical to us is–we are certified by the premium brands we install. This means your manufacturer’s warranty stays intact when the film is installed by us. This adds up to extended life for your window film but also gives you the peace of mind that comes from knowing your film is guaranteed to last. We also offer one of the largest selections of films in not just San Antonio but all of Texas. So, you will always find what you need with us! Contact us today to learn more about how you can improve the comfort of your San Antonio home with window film. We will be happy to review our variety of films and find pricing that works with your budget.