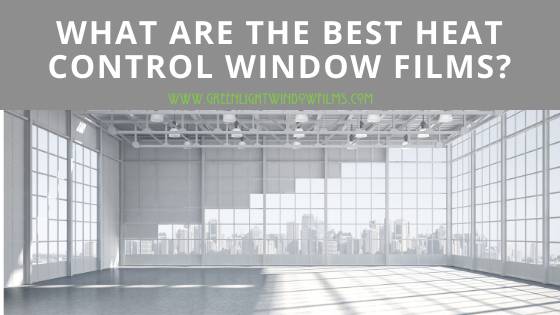 What Is The Best Heat Control Window Film?

There are a lot of heat control window films on the market. They work through different mechanisms like reflection and absorption and come in a variety of materials. Ceramic, polyester, and metal are the most common. Add to this the fact that every major brand has 2-6 selections in each of their numerous series and you get scores of options to choose from. Perhaps too many.  To help you along we have listed some of the heat control window films we find effective.

Enerlogic 35: With this film, you lower emissivity and add insulating power to your windows. While both reflective films and EnerLogic window film lower heat gain by blocking solar heat, EnerLogic window film takes it a step further. It lowers temperatures even more by reducing heat flow through the windows from warmer outdoor objects.

3M Prestige: window film for sun control – A clearly superior way to protect your home
Until recently, most window films that rejected heat for interior temperature control were tinted dark and used metals. In addition to being highly reflective, these films were susceptible to corrosion. Because Prestige films use no metals, they are the first clear films to offer a variety of selections that eliminate this problem and perform to the industry’s highest standards.

SolarGard: ECOLUX 70: This is the brand’s most advanced solar/heat control product. It is barely visible on glass but this doesn’t stop it from providing year-round energy-savings and more comfort too! Plus, it looks great too–letting in 68% of natural light while it blocks out 52% of solar heat.

Any of these fine films are a great choice to take care of your Austin homes solar heat gain issues. As to which one is right for you? Schedule a free onsite window consultation and let Greenlight Window Films help you find out.