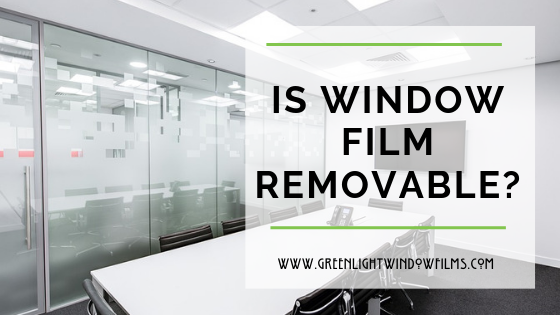 Decorative window film is a wonderful addition to many homes and businesses here in the FoCO area. It adds style, makes spaces more private and even cuts down on energy costs. These films are made even better by the fact that they are fast and easy to apply. Plus they come in custom designs through window film dealers like ourselves at Greenlight Window Films. What’s wonderful about these films is they are incredibly easy to maintain and will last for a year. But you may want to remove decorative films at some point. In fact, we get calls about this frequently. People wondering if they can remove the films themselves or need a professional. Well, you can actually do it yourself and below some direction on how.

What Is Needed To Remove Window Film?

The type and amount of tools you need depends on which film you have. Static cling film and adhesive backed film vary in many ways from one another so they require different resources to remove the. For static clings films, you will need a razor blade, spray bottle with water, and/or a hairdryer. But for adhesive backed films, especially older baked-on films, you may need a few more things to help you take it off: an ammonia-based solution, spray bottle, drop cloth, and a razor blade or scraper are all possible additional tools.

How To Take Static Cling Films Off

To remove adhesive-free static cling decorative films on your Fort Collins home or commercial space you will need to peel the film off. You can use your fingernail or a stainless steel razor blade to help you get under a corner to get it started. Then simply pull and peel the film off the glass surface. Work diagonally across the glass. If you are having problems getting it to peel try wetting it down using water and a spray bottle or heating it with a hairdryer.

How To Take Adhesive Backed Films Off

Adhesive-backed films are harder to remove. The first step is to dissolve the adhesive with vinegar or ammonia-based solution. Adhesive removal products are also available for purchase for tough residues, or to speed things up. Spray or rub down a corner of the film and as soon as the film gives way, start peeling at a diagonal angle. Apply the removal solutions to where the glass and films meet as you go. Keep peeling–at points allowing a bit of time for the solvent to sit and soak into the film. This may take an hour or longer. Let it soak overnight for best results. Once the film is gone wipe down the glass a final time and polish until your window is clean and free of any trace residue.

Here at Greenlight Window Films, we are always here to answer any questions about removing window film and/or contact us for pricing on window film removal.