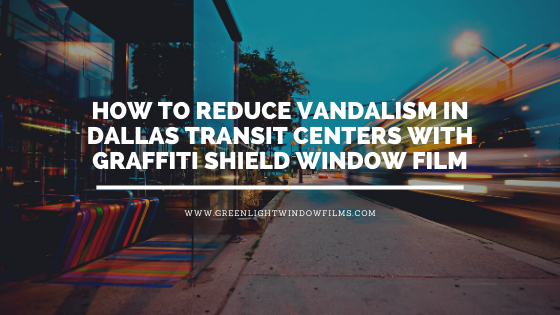 Property crime rates in Dallas have been steadily climbing over the past few years. Break and enters have become a serious issue in parts of downtown. While most of the outlying suburbs and neighborhoods have been harbored from this activity and remain safe, one issue they haven’t evaded is vandalism. It’s everywhere in Dallas, and pretty much any big city in the United States. And transit centers get the worst of it.

The good news is, transit organizations have found a way to fight back. No longer do companies have to sit back and watch their train cars, bus stops, or buildings be totally obliterated by graffiti. With Graffiti Shield Window Film, Dallas transit centers can stay vandalism-free year round.

Graffiti Shield Window Films are a truly innovative solution. While other security methods are aimed at deterring criminals, this technology actually stops the crime from happening. When vandals attempt to deface the surface of a public building, they’re actually not coming into contact with the building at all. Instead, they’re scratching or marking a sacrificial film. This film is easily disposed of and replaced, requiring the property owner to absorb only a minimal cost.

If you have a vandalism problem at your Dallas transit center, you should definitely consider Graffiti Shield Window Film. Installing it is affordable and super easy. Just follow these simple steps to get started:
1. Identify problematic areas in your building where graffiti may be a risk.
2. Contact a Graffiti Shield installer to have a protective film installed for your building.
3. Choose the film that best matches the existing surface.
4. Sit back, relax, and enjoy the best vandalism defense on the market.