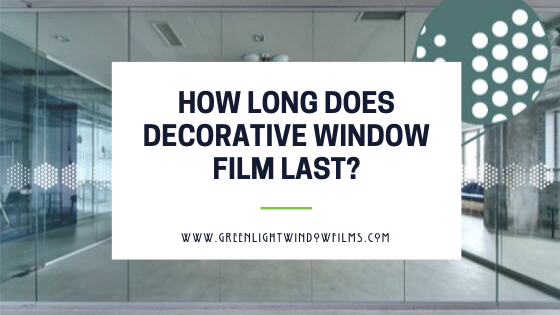 We have seen quite a few botched window film installations in our experience as window film contractors. From tinting to decorative films this process can go south fast. We appreciate the DIYers out there but, sufficed to say, if you want a decorative film to last for a good length of time–it is better to leave it up to a professional. Film isn’t hard to apply but it is easy to apply wrong–and just the smallest bit of air or trapped moisture could ruin an entire window. Also, when you apply decorative window film yourself you almost always void the warranty. For decorative window film that looks fabulous and lasts for years to come–always hire a seasoned professional.

Any type of decorative window film that is poor quality will not last long or look good. Trusted brands are more expensive but worth their cost in aesthetics and lifespan. This is another reason to use a proven professional for the installation of your decorative window film. Not only will they have the best offerings of legit decorative films–but the films they installed are almost always backed by a manufacturer’s warranty.

The other two factors discussed here are 100% in your control. However, this last one is just the luck of the draw really. How fast window film breaks down is directly affected by what it is exposed to–namely the sun. Decorative window films that get more sun exposure–will wear down and need to be replaced sooner. However, most films are built to take a fair amount of sun since–that is what they were designed to do.  The good news is, for commercial window film applications there a fairly generous warranty period of about ten years or more. And residential window films often come with a lifetime warranty.

For more information on decorative window films for your Salt Lake City, home or business contact us at Greenlight Window Films today!