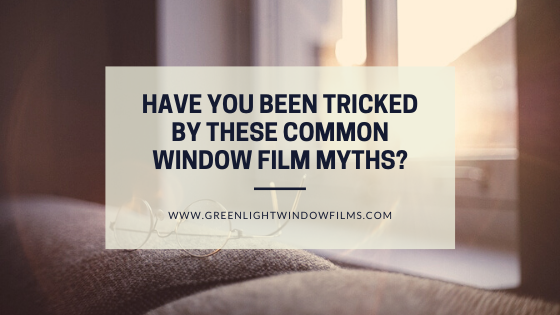 Have You Been Tricked by these Common Window Film Myths?

At Green Light Window Films in Fort Worth, window film myths are something that we deal with every day. We hear it all the time – Won’t window film make my windows dark? I heard that it can ruin your windows. And, our personal favorite: Someone told me it doesn’t even work. There are a lot of myths out there, and they scare people away from making a decision that could be hugely beneficial for their home, school, or building.

A lot of these myths seem like they have scary consequences. But, at the end of the day, they’re just myths. They’re brought on by hearsay or years worth of misunderstandings that perpetuate inaccurate information. So in other words, they’re not true.

Which is what we want to talk about today! In this article, we’re going to explain the truth behind some of the most common window film myths we hear from our Fort Worth customers.

In the age of the internet, consumers are being fed more false information about window film than ever before. Someone gets bad information, posts about it on social media, and pretty soon the thing is a full blown myth. At Green Light Window Film, we feel that it’s our duty to shed some light on these matters. These myths are myths, and nothing more. Don’t let them scare you away from making a great investment!

Here are the three most common myths we hear from potential customers who are interested in window tinting.

Myth #1: Window film makes your windows dark.
Wrong. A lot of window films are actually clear, so they won’t make your windows look any different than they do now.

Myth #2: It doesn’t work.
Not true. Consumers report saving up to 30% on energy costs after window tinting. In fact, it’s so effective that it’s recommended by the U.S. Department of Energy.

Myth #3: It ruins your windows.
Not even close. This is a lie that’s spread by window companies who are trying to get out of their warranty terms. So long as you use the right product and install it correctly, you have nothing to worry about.

Discover the Truth About Window Film

So you see, a lot of the myths you hear about window film in Fort Worth are nothing to worry about. They’re just rumors. Window film is a beneficial addition to buildings of all types, including schools, offices, retail, homes, and apartments. Discover the truth for yourself and schedule a free consultation today!