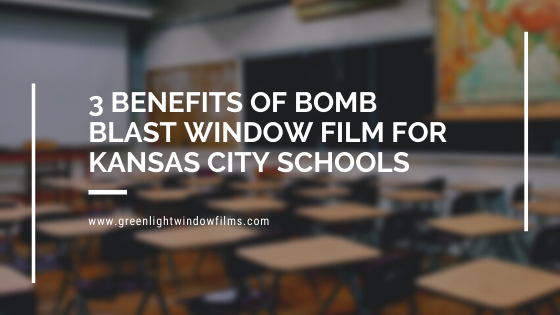 As an educator, you have the responsibility of preparing the next generation to become successful members of society. But your role goes far beyond that. When children are in your care, it’s your job to love them and treat them like your own. That includes looking after their safety.

That’s why you should consider a bomb blast window film for your Kansas City school. Bomb blast window film helps mitigate the effects of blasts, explosions, and violent attacks, protecting innocent students and teachers.
In this article, we’ll discuss some of the benefits of making this improvement to your school windows.

Why Window Film for Schools?

Glass breaks easily. We all know this, yet we use hundreds of square feet of glass in our commercial and public buildings. In other words, it’s all too easy for an intruder to break into a school. All it takes is one swift kick of a boot to punch out the glass panes in a door or window.

Window film helps minimize the safety risks posed to vulnerable buildings by schools by fortifying glass areas. Not only does it prevent glass from breaking, but it also seriously slows down intruders in the unlikely event that they are successful in their attempts.

Learn more about how your Kansas City school can benefit from bomb blast window film by calling our office today!