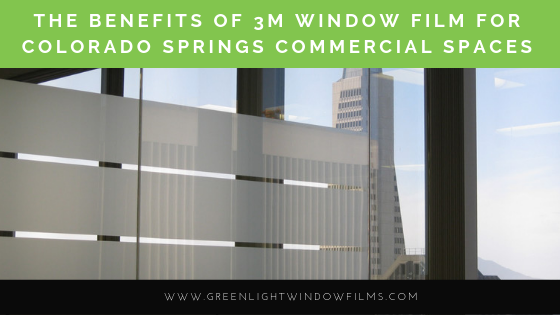 Commercial structures by the hundreds dot the  Colorado Springs landscape and its a good thing too–they serve many important functions: hospitals, schools, law offices and more.  So, ensuring the long term success of these commercial spaces is beneficial to everyone: owners, managers, employees, and Colorado Springs in general.  One very effective technology which is shown to increase the performance of commercial spaces is–3M Window Film. As it were, window film solves a number of problems relating to the windows on commercial buildings.  These solutions allow its inhabitants to thrive and ultimately, make more money.

When it comes to commercial spaces–safety and security are both very important. 3M Window Film is proven to stave off attempts at robbery and even gun or bomb attacks. Additionally,3M Window Film keeps those inside a commercial space safe from flying glass in the case of a natural disaster like an earthquake or tornado.

When it comes to money spent on utilities, commercial spaces here in Colorado Springs and across the country spend a disproportionately high amount of money treating the air temperatures of their spaces.  As it happens, high heating and cooling costs can be attributed to energy loss through untreated windows. Not only does 3M trap heated and cooled air inside, making spaces more comfortable but allows HVAC systems to work more efficiently–which in turn saves Salt Lake commercial owners thousands in repairs.

In the highly competitive business landscape–standing out and making a good impression is everything.  3M Window Film is the perfect way to do this. Not only does window film attract and retain the high-quality tenants you want but also is shown to increase foot traffic too.  Additionally, window films pull double duty as a way not only to brand your business but provide additional privacy as well.

For more information on window film for your Colorado Springs contact us at Green Light Window Films today!