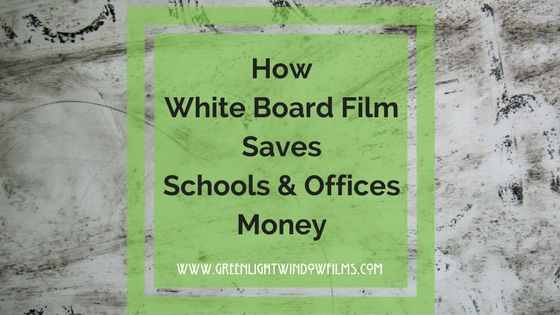 Whiteboard Window Film For Glass Or Other Flat Surfaces

Window Film is a fantastic product in large part because of the sheer variety of applications it can be used for, some of which you might never guess.  For example, did you know that there is a window film that functions as a whiteboard?  Now, this may not seem that exciting until you realize the money-saving benefits to places like schools and offices both of which use whiteboards on a daily basis.  Whiteboard window film creates surfaces for notes, presentations, and brainstorming, just like traditional whiteboards, but at a fraction of the cost.  This benefits schools on a tight budget and offices looking to turn a profit.  Another great thing about adhesive dry erase film is, it can be applied as permanent or temporary, making it even more useful.

If you have ever seen a whiteboard that has been in use for a long period of time in a school, you know how grungy and cluttered they become with marks and scratches that simply won’t go away.  Whether a student wrote on the board accidentally with the wrong kind of marker or a teacher forget to wash off last week’s homework assignments, eventually, a dry erase board becomes permanently marred.  Buying new whiteboards is cost-prohibitive for a lot of schools but, applying whiteboard film, especially for larger projects, costs much less–making it a budget-friendly choice for schools.

A common feature in the modern office space is conference rooms with glassed-in walls.  However, this style does not allow for much space on walls or windows for brainstorming, note taking or presentations during important meetings.  Continually burning through large paper pads is expensive and not great for the environment.  Putting up dry erase window film, either temporarily or permanently, on some of the conference room windows will allow for the same functional benefits of writing things down and present ideas while saving money and reducing an office’s environmental footprint.

For more information on whiteboard window film for your Fort Collins school or office, contact us, at Greenlight Window Films, for detail and rates.