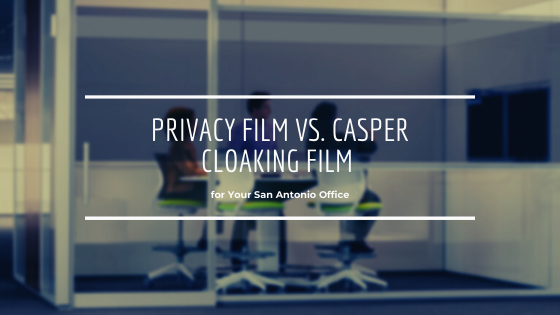 So you’ve just recently renovated your office to make it look more modern? You’ve gotten rid of the tacky cubicle walls and patterned carpet. And now you have a beautiful, contemporary looking space with glass walls and plenty of sunshine. But then you have your first meeting in your new glass conference room and you realize something’s missing…there’s no privacy. Oops.

Don’t worry, you’re not the first business to run into this kind of dilemma. And the good news is, it’s a relatively easy problem to solve. By installing window film for your office, you can easily create the privacy you need.

But which type of window film is better – traditional privacy film or Casper Cloaking Film? Here’s what our San Antonio experts have to say.

Window film has come a long way in the past few years. While you used to only be able to buy flimsy tinted or reflective films, this is no longer the case. Today, property owners can choose from tons of different styles, including fun decorative and patterned options. Privacy films are great for creating privacy without blocking light, and they come in so many different looks, including custom options.

Which Is the Better Option?

Which option is the better choice for you depends entirely on your situation. Are you looking for maximum privacy? Then you may prefer a traditional privacy film, since Casper only covers up part of the wall. Or is your concern maintaining the open look of your office? In this case, Casper Cloaking Film may be the better choice for your San Antonio business. If you’re not sure, it may be a good idea to set up a consultation with a window film expert in your area.

Start exploring privacy options like Casper Cloaking Film and more for your San Antonio office today by calling our team to request an appointment.