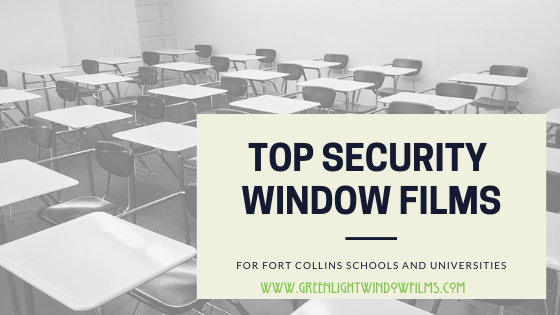 Fort Collins takes great pride in its schools from Beattie Elementary to Colorado State University. As well we should–we have great programs, teachers, and administrators here. As such it is very important that we keep our school’s students and staff safe and in a day and age when violence happens at random--high tech security window films, that protect from bombs and bullets, is not out of the question. However, there are quite a few films and corresponding products out there to choose from. So which one is right for your campus? Read on as we detail different options for security window film that might be right to mitigate damages done in an attack on your Fort Collins school.

3M Safety & Security Window Films excel at protecting from impact from things like flying debris
etc. However, when paired with specialty attachment systems and adhered with C-bond adhesive, which is engineered on a molecular level to make glass stronger and more flexible, these films will resist a considerable amount of impact–including bombs and bullets.

Hanita Window Films have been rigorously tested by the Israeli military and are tested for high impact performance. This extensive field research and proven performance make them great for severe stress environments. They too require a frame and can be made even stronger with C-bond 2 adhesive

LLumar film safety and security film is an affordable alternative to replacing glass windows and doors with traditional “bulletproof” or “bomb-proof” glass. Making it an intelligent security solution for Fort Collins educational buildings. It comes in a range of thicknesses to match for almost any protection project–educational or otherwise.

For more information on bomb blast or bullet resistant window film for your school and other commercial space, contact Greenlight Window Films for pricing today.