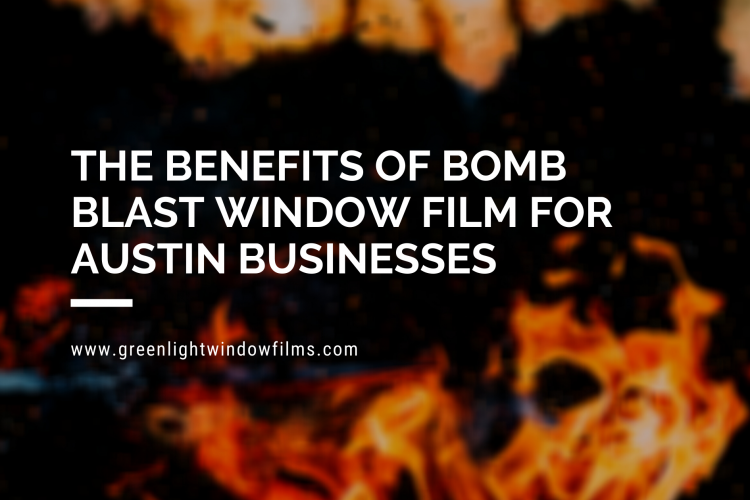 The Benefits of Bomb Blast Window Film for Austin Businesses

Security concerns have been on the rise in the U.S. in the past few years. Even buildings that were once deemed “safe” can no longer be counted on to be secure. Terrorists are going to new heights to make their mark, finding more creative and more violent ways to make their voice heard.

Even in Austin, a place that was once considered a peaceful, artsy town, we’ve had our fair share of security threats. Property crimes increased between 2017 and 2018 by 8%, totaling a rate of 3,458 per 100,000 residents.

That’s why it’s important for businesses in Austin to take security matters seriously. By installing bomb blast window film, Austin businesses can protect their property (and those who occupy it) from life-threatening dangers.

Bomb blast window film is a special type of technology used to prevent windows from shattering during a high force impact, such as a bomb blast, chemical explosion, or shooting. The durable film is mounted to the glass surface and held in place by an attachment system.

When the glass is hit with impact, the film gives it strength and flexibility that prevents it from breaking. It also spreads the force of the impact evenly across the window so that it doesn’t accumulate in one spot. These combined factors prevent shattering.

What If the Glass Breaks?

If the glass breaks, the film will still work. The broken pieces of glass will be contained within the layers of the film. This way, they don’t break loose and fly across the room.

Of course, this is just a short list of the many benefits of bomb blast window film. For more information, check out this brochure: bomb-blast-window-film-austin

Call Green Light Window Films today to find out how you can install bomb blast window film for your Austin building.