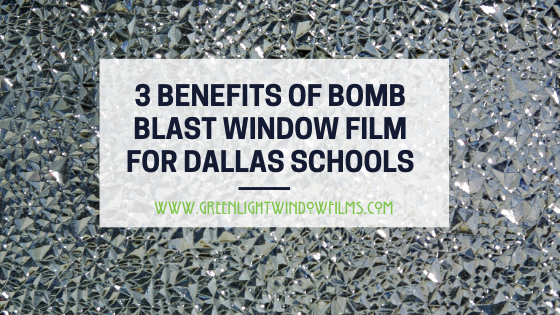 For parents of children in school, we live in frightening times.  While the odds of a school shooting or bomb attack are slim–when they happen they cause devastation. Which is why schools, here in Dallas, and across the US need to do everything in their power to protect their students.  Security guards are a fantastic idea, as well as metal detectors and even active shooter drills may have their place. However, security window film is one of the best methods for schools to stay safer.

How Window Film Protects From A School Bomb Attack

One of the most potent forms of protection for vulnerable entry points for a would-be-attacker is window film. It is a powerful ally for school administrators to consider.  It’s benefits are copious and proven to keep innocent bystanders safer from bomb and ballistics attacks. Read below for more information on the benefits of safety and security for Dallas schools.

The Key Benefits of Bomb Blast Films for Schools in Dallas

For more information on how to protect your Dallas school from gun and bomb violence, contact us at Greenlight Window Film today.