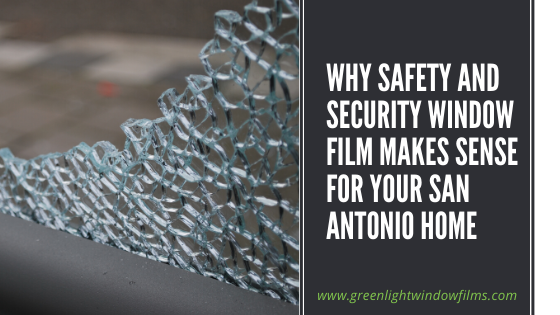 Safety and Security Window Film for Protection Against Natural Disaster

Just like safety and security window films protect from high-velocity projectiles like bullets and bombs, it also stands up to flying debris from severe storms.  From branches thrown about in a tornado to rocks and debris during a hurricane–window film stops shattered glass from flying around during a natural disaster.  One of the biggest causes of harm to humans and homes during a natural disaster is flying glass.  Since safety and security window film causes glass to break into small pieces and then keeps those pieces soundly adhered–your home is much safer during the sometimes powerful storms we see here in San Antonio.

When it comes to dangers to your family in your San Antonio home–glass is one of the biggest.  Large plate-glass windows, glass in slippery/wet areas like showers or glass features on balconies are dangerous–especially if you have kids. Slip and falls into these features could cause massive injuries. A simple and cost-effective way to make these areas safer and a workaround for installing tempered glass is window film.

One of the biggest dangers to our health in our San Antonio homes is actually the rays of the sun. UV rays may not seem like a big threat–but they are truly insidious.  The glass on your windows does nothing to stop the rays of the sun. Even though safety and security window film is made to protect from the dangers inherent in breaking glass–it also blocks UV rays too. In fact, it has an SPF 1000 which will help reduce the harmful effects of the sun like skin and eye diseases or cancers.

For more information on the benefits of safety and security film for your San Antonio home, contact us at Greenlight Window Films today!