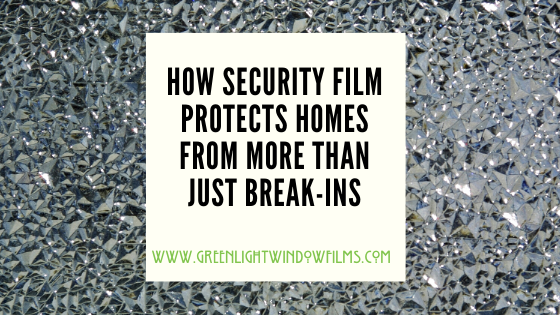 Kansas City is a safe place to live and raise a family but crime, like any city in the US, is still an issue here. One of the biggest crimes that residents of KC report are break-ins.  Security window film is a way to protect your home against would-be-thieves. It takes multiple blows to penetrate and often deters burglars. However, there are other benefits to security window film for Kansas City home’s too.

Security film is a great way to protect your home from crimes of theft but here are actually a lot of other important benefits to these films too.

Any area of your home that has glass holds the potential for an unfortunate accident. This includes glass by staircases, showers, pools or very large plate glass windows.  Should someone fall into them–they could be grievously harmed. Having security and safety window film applied to these windows keeps glass intact on the film even if someone falls into them–keeping them safer.  In fact, security films can be used as a workaround for tempered glass to bring your home up to code.

When a natural disaster occurs one of the biggest causes of harm to humans is from glass.  Whether a tornado or an earthquake–glass breaks and explodes outward to harm bystanders. Not when the glass is treated with security window film though. The glass stays safely adhered to these films in tiny shards where it cannot hurt anyone.

Most people don’t realize that the rays of the  sun beaming into their homes can be a cause of illness and disease.  From migraines to melanomas–unchecked UV rays are a real danger. Security window film blocks 99.9 % of these rays from entering into your home.  Keeping your family healthier and better protected from some types of skin and eye cancers.

For more information on safety window film for your Kansas City home contact us at Greenlight Window Films today!