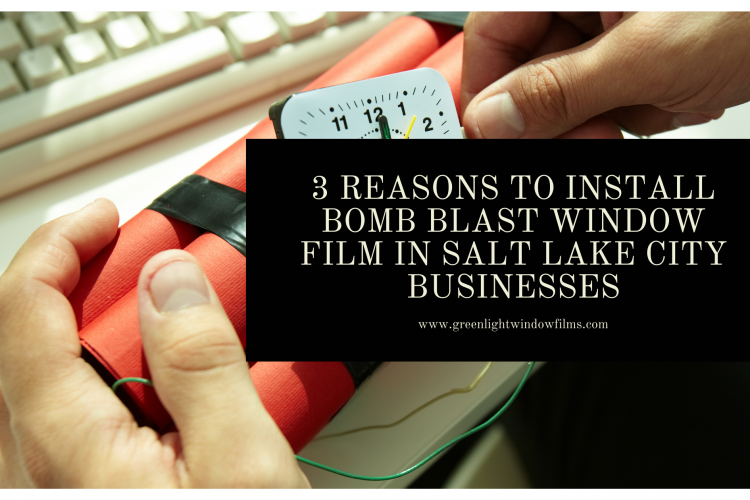 Security is one of the biggest challenges that we’ll face in the future, both in an online and physical sense. Hackers are getting smarter, which means it’s becoming easier for criminals to access sensitive information. The internet has also made it easier to facilitate organized crimes, posing an increased risk to schools, churches, airports, and other public places.

Now, more than ever, it’s important to have strong security mechanisms in place. The safety of staff and the general public depend on business owners taking these matters seriously and putting the right protection in place.

When you consider how a building is structured, it’s easy to identify the most vulnerable areas. Windows, glass doors, and glass ceilings are the most fragile parts of a building’s exterior. If they break, and the glass explodes, the results can be life-threatening. Therefore, glass areas need the most protection.

When a bombing occurs, the film absorbs some of the energy, weakening the force of impact. The glass pane is also given more flexibility so that it can withstand the remaining energy that it receives. This, in turn, prevents windows from breaking and keeps those inside the building from being harmed.

Learn more about how it works by downloading this brochure: bomb-blast-window-film-salt-lake-city-businesses

Truly any type of building in Salt Lake City can benefit from bomb blast window film. However, we recommend it most often for:

2020 has been proof of the need for better security in public places. The riots and other shocking events that took place this year has shown us that the world can be dangerous at times. If you haven’t upgraded your property’s security in a while, bomb blast window film is a great option. Here’s why you should consider making the investment this year:

1. As riots become normalized, they could become a more frequent occurrence, putting businesses at increased risk of incurring physical damage.

2. Cyber security is becoming an increasingly serious issue. Businesses that rely on electronic locks or alarms may want to consider investing in backup plans incase these digital devices get hacked, in which case bomb blast window film could be a good option.

3. In the event that another pandemic occurs, bomb blast window film could help protect empty stores and offices that may be temporarily forced to close down.

When you take these matters into consideration, now might be a good time to update your building’s security with bomb blast window film.

Protect Your Property Now and In the Future

Call Green Light Window Films today to learn how you can get bomb blast window film for your Salt Lake City property.