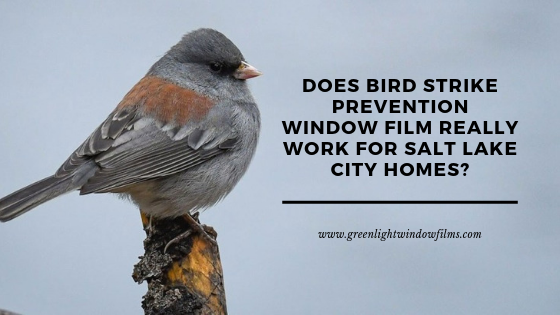 Birds are beautiful creatures. So of course it’s upsetting to find a dead bird by your home. Maybe your dog or cat brought one inside or maybe you actually heard the thud of something hitting your window. Either way, it’s just plain sad to deal with.

But what’s even sadder is that millions of birds die this way each year. And that’s just in the United States. Birds end their lives unknowingly by flying into windows they can’t see, most of which belong to our homes.

What Are Bird Strike Prevention Films?

If you’re not familiar with bird strike window films, it might be helpful to know a little bit about how they work. The theory is that birds fly into windows because they can’t see them. Either the glass is clear and looks just like sky or it’s highly reflective, which mean it can mirror the image of trees or bushes nearby. Either way, birds can’t tell it’s there and they fly straight into it.

Bird strike window films stop this form happening by making windows easier to see. They use patterns, dots, and grids to create something that looks more like a solid wall so birds know not to fly into it.

Does It Actually Work?

There’s no guarantee that installing a bird strike prevention window film for your Salt Lake City home will be 100% effective all of the time. Every situation is different. However, these films are generally known for being successful. In fact, they’re recommended by the American Bird Conservancy. If you’re dealing with glass collisions, they’re definitely worth a shot.

Do you have questions about bird strike window film for your Salt Lake City home? Call our office to get more information.