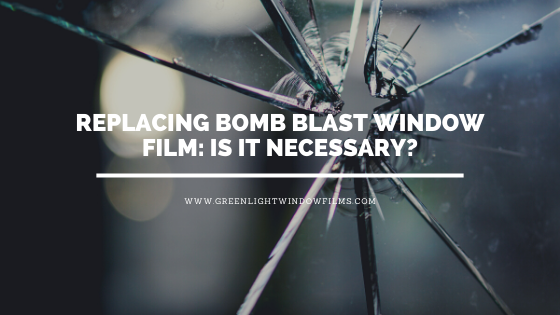 It’s 2020 but finally society is realizing that we need better security measures for our homes, schools, and buildings. Thankfully, expensive industrial locks, security cameras, and alarm systems are no longer the only option. Now, property owners in Salt Lake City can install bomb blast window film and achieve superior protection and peace of mind.

But how often do these window films have to be replaced? After all, they’re not cheap (cheaper than bulletproof glass, but still…) so they need to be able to last a few years at least so you can get your money’s worth out of them.

High grade architectural window films will last about 10 to 20 years. But bomb blast window film is an exception. These films will actually last the entire lifetime of a window. Unless you take them off, they’ll stay in place and continue to work their magic.

Do You Ever Need to Replace Them?

The only time that you need to replace bomb blast window film is if its integrity is somehow compromised. If a blast occurs nearby and the film is torn or broken, or a criminal tries to get inside by piercing the film, then you will need to have the remaining material removed and replaced.

Otherwise, the film should last thirty years or longer. This is the same life expectancy of a standard vinyl window.

In some cases, the “tinted” color may fade from the film. If it’s exposed to a lot of sunlight, this is more likely to happen. In this case, you may want to replace the film so that you can retain the energy efficiency benefits. But it’s up to you. The safety capabilities of the film will remain as strong as ever.