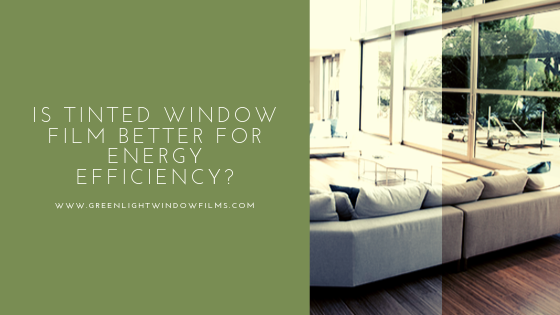 If there’s one thing that all of us in San Antonio have in common, it’s that we’re all familiar with the heat. We all know what it’s like to spend the month of July melting in the summer sun, praying for fall to arrive as fast as possible.

Window film is well-known method for improving the energy efficiency of a building. It can be installed on both homes and commercial properties and when in place, it improves comfort and reduces the amount of energy used by hvac systems.

But there are a lot of different kinds of window film out there, so how do you know which is best? Is tinted window film better for energy efficiency? Or can you get the same results with some of the newer clear window films?

Here’s how to find the best energy efficient window film for your San Antonio property.

Before we dive into which window film works best for energy efficiency, it’s good to know about the different types of film out there. Here are some of the most common solar control films:

If your goal is to reduce glare or create privacy, then tinted window film is a good option. However, it’s not always the most energy efficient choice.

In general, tinted films do tend to be more powerful when it comes to heat control, but not always. Usually, the lower the VLT, the higher the heat rejection.

However, some glare reduction films that have low VLT aren’t necessarily great for heat reduction. Similarly, there are many clear window films, like low-e window film, that offer far better heat reduction that most tinted films out there. So truly, it all depends.

The best way to find a good energy efficient window film for your San Antonio property is to ask the advice of a local tinting contractor. At Green Light Window Films, we offer free consultations for all of our San Antonio clients. For more information on our products, please contact our office.