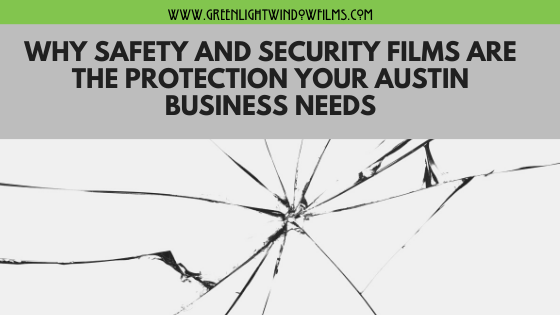 Running any size business is hard and comes with some inherent risks. Meaning you need to think long and hard about how to avoid things that could hurt your business.  The glass on your building could be one of those risks.  It is a hole in your building’s security and it can cause other issues, like injury too.  A smart way to remove some of the risk in your small business in Austin is by having window film applied.

Safety And Security Window Film To Protect From Theft

Window film is a strong way to stop the windows on your Austin business from giving way should someone attempt to rob you.  Smash and grabs crimes are common and tend to be crimes of opportunity.  Glass treated with window film still breaks when hit by an object but it will take numerous blows for a  would-be thief to get in. Time and time again, when the “quick score” aspect of a smash and grab is removed–most criminals will just move on to an easier target.

Safety And Security Window Film To Protect From Accidents

Whether you run an Austin retail store, restaurant, or other professional business– your patron’s safety is up to you. Glass windows pose a safety threat to those inside your establishment–especially if they are large or plate glass.  The fall out from accidents involving glass cost business owners across the US millions  To remove the risk of injury to your patrons and even litigation–safety and security window film is the way to go.  It keeps the glass in place after a fall or slip keeping people from hurting themselves on dangerous shards of glass.  It can also prevent successful lawsuits against you since you took precautions to protect the people in your Austin establishment.

Safety And Security Film As A Tempered Glass Alternative

Renovations are common for business but during these, you will need to bring your building up to code.  Old glass is often plate glass which will break into large shards and seriously injury someone should they fall into it. To bring your space up to code you will need to install tempered glass.  However, this can be expensive.  A solution to this is safety and security film.  By installing these films is a workaround for installing new tempered glass and is much less expensive too!

For more information on safety and security film for your Austin business, contact us at Greenlight Window Films Austin today!